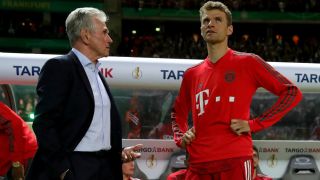 Ante Rebic scored a brace having netted in the first half and again on the counter-attack with eight minutes remaining after Robert Lewandowski had equalised for Bayern.

VAR had ruled in favour of Rebic for Frankfurt's second goal in the 82nd minute and Kovac's men were fortunate again when referee Felix Zwayer turned down penalty appeals from Bayern players in the fourth minute of stoppage time – Kevin-Prince Boateng appearing to foul Javi Martinez.

Frankfurt then broke on the counter-attack and sealed a fifth cup triumph via Mijat Gacinovic as a host of Bayern stars stormed off the pitch after receiving their runners-up medals.

But head coach Heynckes played down the lack of post-match protocol, telling reporters: "Something I have to admit is that I actually would have expected an official, either from FCB or DFB to tell that we should wait until the trophy was handed in.

"I do not think that this happened on purpose. I have to tell you that in this moment I did not think about this at all, because otherwise I would have told my team to stay of course.

"Some players stayed, the sporting director as well. But this was a misunderstanding."

We win together and we lose together. Whatever the result, we will always be a team May 19, 2018

Bayern star Thomas Muller denied the German champions showed a lack of respect towards Frankfurt, adding: "Frankfurt formed a guard of honour and I also asked our team supervisor if we also needed to do it. Then she said: 'No, that's the other way around. The winner forms a guard of honour for the loser'.

"I cannot understand why there is a discussion now. Frankfurt have earned it from a sporting perspective. It was not a sign of disrespect. It's hard enough to go through a guard of honour if you've lost and then face the winner. I do not think that Frankfurt were sad that we did not celebrate."

Heynckes, who won the treble during his previous spell in charge of Bayern in 2013, was asked about the referee's decision not to award a 94th-minute penalty.

However, Heynckes refused to take anything away from Frankfurt's achievement at the Olympiastadion.

"In my whole career I have nearly never talked about the referee and I won't do that today," he said. "But when I listen to the TV commentators and got information afterwards that say it was clearly a penalty… alright, there's no use of lamenting and discussing.

"We missed before that to go in front after the 1-1, to win the game. So, I think we should try a different way and recognise that Eintracht Frankfurt with their means deserved to win the Cup. Compliments on that."