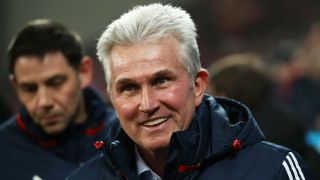 Jupp Heynckes praised Bayern Munich's tactical control of Bayer Leverkusen as the Bundesliga leaders kicked off the second half of the season with a 3-1 at the BayArena.

Leverkusen had not lost in 12 league matches prior to the mid-season break but on their return that run came to a juddering halt at the hands of the Bayern juggernaut.

However, Bayern were in control throughout and that particularly pleased their veteran coach as they march on towards a sixth successive league title.

"After the 2-0 we lost a bit of our concentration and had unforced errors with the ball. But it's just tough to win here.

"Leverkusen is a young and very talented team which played very offensive."

Thanks for the support tonight, fans! Superb, as always January 12, 2018

Ribery's second-half strike was his first of the campaign, and the Frenchman was delighted to have had an impact for the leaders on a tough away trip.

"To score a goal is always nice," he said. "In Leverkusen the game is always difficult.

"They put a lot of pressure on us.

"We have to play better with the ball, but we won 3-1, that was important."