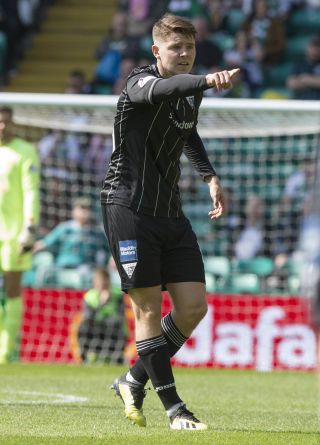 Kevin Nisbet opened his Hibernian account with a hat-trick against Livingston and set his sights on reaching at least double figures for the season.

The former Dunfermline striker scored twice in the first half of the 4-1 Scottish Premiership success from Daryl Horgan crosses and then added a late third from the penalty spot.

And he made sure he got the match ball afterwards as a memento, adding: “It’s brilliant for me to get that hat-trick.

“To get the first goal is vital in the first couple of games at a new club. I’ve got three now and it’s a good marker to go on for the rest of the season.

“It’s just about hitting 10 and then go from there and get as many goals as I can.

“I actually ran out to see where the ball was after the game and got most of the boys to sign it for me.”

Nisbet insisted there was no chance of anyone else taking the spot-kick after Joe Newell was fouled by Marvin Bartley two minutes from time.

“The most important thing was the three points. It’s a hard place to come to, on a hot day when the pitch is a bit dry.”

Christian Doidge got the other Hibs goal and Nisbet hopes the pair could enjoy a fruitful partnership in attack this season.

He said: “Christian can complement my game well. He’s great in the air, he gets a lot of flick-ons and he’s experienced as well.

“I think we worked well together and we can be a good partnership going forward.”

In contrast, the only bright spot for Livingston was a penalty scored by Lyndon Dykes when they were already three goals down.

Manager Gary Holt said his players needed to quickly forget the praise they got for finishing fifth last season.

He explained: “I have told them that all the good work we did last year – forget
it. It is done. Fifth place was last year.

“They have to take responsibility, look themselves in the mirror and make sure they can say, ‘I did my job to the best of my ability’.

“That does not always mean you’ve won the game but it means you have put in a shift and done your job.”