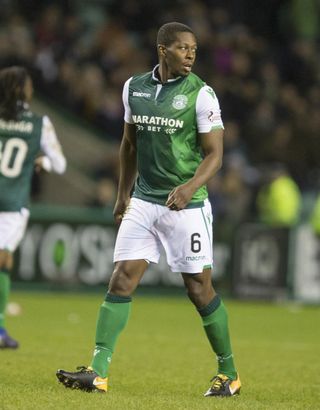 Livingston have earmarked Marvin Bartley to become a role model for their younger players after signing the Hibernian midfielder on a pre-contract deal.

The 32-year-old has agreed a contract to join Livingston for three seasons.

Manager Gary Holt told the club’s official website that he and assistant David Martindale saw Bartley being a key player.

“Davie and I are delighted to secure the services of Marvin for the next three seasons,” he said. “He will bring that much-needed experience to the squad and we feel he has a lot to offer on and off the park for the club.

“He has been a fantastic servant to Hibs and is a player we have both admired from afar. He has played a vast amount of football at a very good level in his career and we felt it was important to bring a player of this stature into the club to help the younger and more inexperienced players throughout the season.

“Marvin is a fantastic professional and role model for all the younger players to look up to at Livingston FC and I’m sure we will all see that over the course of the new season.

“We are both really looking forward to working with Marvin and he will most definitely add to this group of players we have signed up for next season and beyond.”

He delivered a thank-you to colleagues and supporters in a video message, telling fans: “You have all been a massive support to me on and off the pitch. You have stuck up for me when I needed you to stick up for me, you have cheered me when I needed to be cheered. I owe you people an awful lot.

“It’s been a great four years. I have made friends for life, there are fans as well who I can now call friends who have been absolutely brilliant.

“It’s going to be an emotional time on Sunday when I finally bow out as a Hibs player but I like to think I have helped the club come on a bit, starting in the Championship.

“I will always be a Hibs supporter, I will bleed green from now on because it was such a special time in my life.”