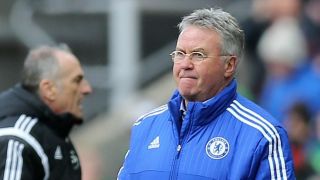 Chelsea's players should not be feeling pressure to impress new manager Antonio Conte, according to interim boss Guus Hiddink.

Conte was confirmed as Jose Mourinho's permanent replacement this week and will assume the reins after leading Italy at Euro 2016.

In the absence of a number of key first-team players, Chelsea were beaten 1-0 by Swansea City in their first match since the announcement on Saturday.

But Hiddink insists the players should find enough motivation to put in a good performance without focusing on Conte's looming arrival.

"It's not just for the new manager," he said. "I think when you play for a club like Chelsea - for any club - you have to show every week what you are capable of.

"It's not just because of external motivation, I think the players have to be internally motivated.

"That's a key condition to play in a big club."

Asmir Begovic was preferred to Thibaut Courtois in a shock call in the Chelsea goal.

Explaining the decision, Hiddink added: "Begovic is a good goalie, he has proven that already in many Premier League games.

"He's doing his job very well as a professional in training for himself to get in good shape.

"But every training he is 100 per cent committed and on top of that he's helping out Thibaut Courtois in a very good professional way.

"That's why I rewarded him with playing at least one time."

The defeat represented Hiddink's first in 16 Premier League matches since taking over in December, but the Dutchman played down his disappointment at not making it to the end of the season unbeaten.

"It's not a personal objective, but at the same time it's the objective that you win the games, then Chelsea wins and the team wins," he commented.