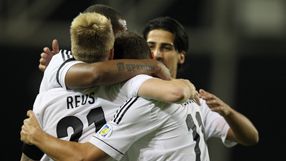 Sweden also have a perfect record and are second with six points from two games, but Reus was left scratching his head when asked by reporters on Sunday to name any of the Scandinavian country's defenders.

"Ah, is Olof Mellberg there, has he retired?" Reus said in a reference to Sweden's former captain who ended his international career after Euro 2012. "Honestly I do not know. I have not dealt with that yet."

Germany could be forgiven for focusing less on their opponents than on their own game, having won 13 consecutive qualifiers for Euro 2012 and the 2014 World Cup.

Captain Philipp Lahm, back from suspension, said they were well prepared to face their biggest group rivals and in-form striker Zlatan Ibrahimovic.

"It will be a tough job against an opponent who is organised, tactically clever and has an outstanding striker in Ibrahimovic. It is our toughest rival in our group," Lahm told reporters.

"We have to be able to withstand that pressure, break forward very quickly. He is the complete striker, the complete package. If we allow few chances at the back then we will win."

The Germans seem to have shaken off their early cobwebs and their win in Dublin confirmed their status as group favourites after lacklustre performances in their first two games.

"We are focused. We take every game very seriously. That is what we are doing. We know what's at stake," said Lahm.

Sweden looked far less convincing in their 2-1 win away to the Faroe Islands on Friday and needed a 75th minute Ibrahimovic goal to spare their blushes as they came from behind against the bottom-placed team.

"My scout has told me the Germans played fantastically," said Sweden's coach Erik Hamren. "It will be a wonderful challenge. We have to be physically strong, both in one-on-ones and in running."