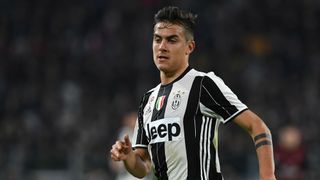 Juventus will start four forwards in their Champions League quarter-final against Barcelona on Tuesday, coach Massimiliano Allegri has confirmed.

The Serie A leaders have racked up 32 straight wins at home in the league and have not lost a European game at home for four years as they prepare for a rerun of the 2015 Champions League final.

Allegri's men have only conceded twice in this season's Champions League but the coach said he will be naming an attacking line-up for Tuesday's opening leg although defensive solidity will still be important.

"I won't say the formation, but tomorrow the four up front [[Juan] Cuadrado, [Paulo] Dybala, [Mario] Mandzukic and [Gonzalo] Higuain] will all start," Allegri said. "When you play the first leg at home, it's always nice not to concede.

"It won't be easy so we have to try to score more than them. You can't hope to face Barcelona and draw 0-0 twice and win on penalties."

Allegri suggested Dybala, who has hit 14 goals in all competitions for Juventus this season, has the potential to become one of the top players in the world, succeeding his Argentina team-mate Lionel Messi.

"In order to qualify we will have to play two great games and also have a bit of luck. Barcelona lost at the weekend [2-0 at Malaga] but they never make mistakes in this type of match.

"However, they always give something away and we will have to be good to hit them when we have the chance to do so."

Barcelona had to produce a stunning comeback in the last round, beating Paris Saint-Germain in one of the Champions League's most dramatic matches ever, and Allegri expects Juventus to be pushed hard by Luis Enrique's men.

"That match taught us that nothing can be taken for granted in football, especially at this level," Allegri said. "So the thing we have to do is think about the game tomorrow and make sure we get it right, then we'll think about the return fixture.

"But again, it's a major quarter-final, like the one with Bayern [Munich] and Real Madrid, these are four teams who are contenders for the Champions League, along with Atletico Madrid, the four will meet and two will remain.

"They will definitely be four evenings of great entertainment and we'll have to play our game with great calmness and great technique, because when you play at this level it takes great technique, as well as being balanced on the field in defence and attack."