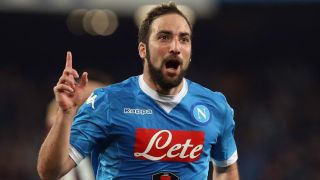 Roma boss Luciano Spalletti has claimed that Serie A could become stronger if Napoli sell Gonzalo Higuain to Juventus.

The Argentina international has been heavily linked with a move to the champions as part of a player-plus-cash deal, which is reported to include midfielder Roberto Pereyra and a €50million transfer fee.

Napoli have persistently denied that Higuain has requested to leave the club and are determined to hold on to a striker who scored 36 league goals last season, breaking the record of 35 set by Gunnar Nordahl in 1949-50, while club president Aurelio De Laurentiis is thought to be reluctant to consider any offer below his €94m release clause.

Roma, meanwhile, have seen Miralem Pjanic swap the Stadio Olimpico for Turin in a €32m deal as Juve have ruthlessly set about strengthening their squad ahead of a tilt at a sixth consecutive title.

But Spalletti, speaking after his side's 3-1 friendly win over Terek Grozny, has suggested that Higuain's sale would allow Napoli to strengthen the overall quality of their squad, while giving Juve the chance of winning the Champions League.

"I actually think Higuain at Juventus would raise the overall quality level of Serie A," he told Sky Sport Italia.

"That way, Juventus would have another great champion and attempt to win the Champions League, giving them the highest ambitions.

"As a consequence, Napoli would use that money to build an equally strong squad and bring in four or five top quality players."