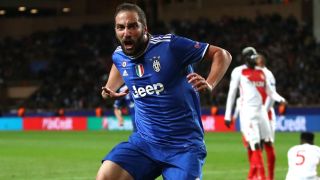 Gonzalo Higuain insists his brace against Monaco was not a response to the hat-trick netted by former team-mate Cristiano Ronaldo as a likely Champions League final between Real Madrid and Juventus looms large.

A treble from Ronaldo against Atletico Madrid at the Santiago Bernabeu on Tuesday means Zinedine Zidane's holders are widely expected to secure a place in the decider in Cardiff next month.

Higuain, who played alongside the Portugal forward in the Spanish capital from 2009 to 2013, struck twice as Juve registered a commanding 2-0 victory at Monaco in the other semi-final a day later.

: "We’re closing in on three important objectives that we've set ourselves this season." Fore More May 4, 2017

Asked by Corriere dello Sport if his exploits at Stade Louis II were inspired by Ronaldo's efforts, Higuain replied: "No, I try to do my best without thinking of others.

"We are close to an extraordinary goal and we only have to take care of ourselves."

Barring remarkable recoveries from Atletico and Monaco, a clash between Madrid and Juve in the final would represent a reunion for Bianconeri pair Higuain and Sami Khedira with their old team-mates.

"It definitely would be a special situation because I played in Madrid for seven years," said Higuain.

"But first, I insist, the final must be reached."

Juve, who lost the 2015 Champions League final to Barcelona in Berlin, are closing in on an unprecedented sixth successive Serie A title and have also reached the decider of the Coppa Italia against Lazio, raising the prospect of Massimiliano Allegri's side securing a hugely impressive treble.

"We realise how strong we are, we know we can fight against anyone," said Higuain.

"We are close to three important goals and we hope to reach them.

"It's time to give it [our] all. We hope it will become a dream season. However, in [the] Champions [League], the return [leg] hasn't happened yet. Monaco is strong and the tie isn't over yet. We have to be calm, we have not won anything yet.

"In fact, we are very focused on the championship. We hope to beat Torino and close out the Scudetto as soon as possible," he added, referring to the impending Turin derby on Saturday.