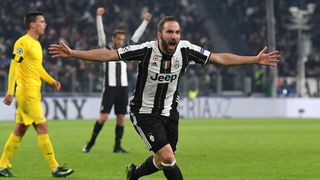 Higuain became the world's most expensive striker when he signed for Juventus from Napoli last July in a Serie A-record deal.

The 29-year-old has scored 29 goals in all competitions this season to propel Juve towards an historic treble, although his form in the Champions League has come under scrutiny.

Higuain has not scored in the competition since this season's group stage and has only managed two goals in 24 appearances in the knockout phase in his career.

His ability to perform on the big occasion has been questioned throughout his career, especially since key misses for Argentina in the finals of the World Cup and Copa America, but Passarella has backed him to perform in this year's semi-final against Monaco.

"Inevitably it depends heavily on others," Passarella, who coached Higuain at River Plate, told La Gazzetta dello Sport. "In a defensive game like at Camp Nou [in the quarter-final second leg] there is little you can do.

"Gonzalo has only been bad in the 2014 World Cup and then in the Copa America. It was as though his stars were out of alignment.

"I remember when everyone was impressed by the 25 billion lire paid [by Juventus in 1990] for Roberto Baggio. Of course, 90 million euro is a lot, but all records are made to be broken.

"Figures are soaring, football is changing and soon there will be a team that pays more for a striker than Pipita. His fee should not weigh on him."