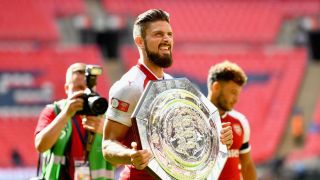 Chelsea's deal to bring Olivier Giroud across London from Arsenal ends a striker search that has endured as one of the most bizarre and entertaining features of the transfer window.

Giroud's pedigree at the top of the game for club and country makes him a valuable addition for Antonio Conte, but there was a point at which it seemed any warm, tall body would do as the Italian searched for a "point of reference" for his attack.

Of course, he had Diego Costa, but a text message famously put paid to that last year.

From a veteran to a stricken, injury-plagued international and an unheralded workhorse, we look at some of the forwards touted for improbable moves to Stamford Bridge in a month when the goals dried up for record signing Alvaro Morata.

27 – Since his debut in August 2012, Olivier Giroud has scored more headed goals in the Premier League than any other player. Height. January 31, 2018

Such an imposing presence during his time at Athletic Bilbao, Llorente's 2017-18 has comprised of Chelsea failing to buy him when he moved from Swansea to Spurs, scoring a solitary Premier League goal – naturally against his former club – and Chelsea being heavily linked with him again. His diet of watching Harry Kane score a bucketful will continue.

Barnes' studs-up challenge on Nemanja Matic that then-Chelsea manager Jose Mourinho branded as "criminal" in February 2015 looked set to be his most notable association with Stamford Bridge over the course of his career. Surprisingly, Burnley boss Sean Dyche found himself fielding regular questions over the Bath-born Austria Under-20 international moving to west London. Barnes, 28, has three goals in 23 Premier League appearances this season.

Chelsea reportedly wanted a loan, with West Ham only keen on a sale before Carroll, inevitably got injured. When the England international can get on the field in one piece, he is a thundering powerhouse and a nightmare for defenders. This happens so rarely it means the idea of Andy Carroll is far more appealing than the reality. Something he has in common with Costa, Conte might argue.

The moment where it all got a bit silly. Come on, Antonio, pull the other one – are you just trying to sign anybody tall? A fine servant for numerous clubs and country, Crouch turned 37 on Tuesday and probably starts more often than he should for Stoke nowadays.

Dzeko's Premier League days appeared to be over when he left Manchester City to little fanfare in 2015 but prolific returns over the past two seasons at Roma placed him on the Ballon d'Or shortlist. Chelsea wanted to bring in the Bosnia-Herzegovina forward along with club-mate Emerson Palmieri but the 31-year-old's desire for a longer contract than the 18-month terms Giroud accepted proved a decisive stumbling block.