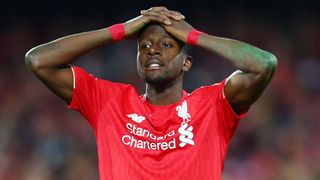 Liverpool were indebted to Divock Origi and Philippe Coutinho for their 2-0 success over HJK in a pre-season friendly in Helsinki.

Brendan Rodgers' side had been less than convincing in a 1-1 draw against a Malaysia XI eight days ago and once again they struggled to overcome their opponents for large parts of Saturday's encounter.

Danny Ings cut an increasingly frustrated figure as he toiled up front, until he was replaced by Origi shortly after the hour.

And the Belgium international made the most of his time on the pitch, firing in from close range with 17 minutes remaining to break the deadlock.

As Liverpool's added quality shone through in the closing stages, Coutinho added a second via a deflection six minutes later as Rodgers' men saw out a hard-fought victory.

HJK, 21 games into their domestic season, top of the Finnish league and currently competing in the UEFA Champions League's qualifying rounds, created few openings in a low-key affair.

Liverpool's final friendly before they begin their Premier League season at Stoke City sees them take on Swindon Town on Sunday.

The visitors - who had 18-year-old midfielder Allan on the bench following his move from Internacional - could have found themselves behind in the sixth minute when Ousman Jallow headed Atomu Tanaka's left-wing corner over the crossbar.

Liverpool had a chance of their own 10 minutes later, but Coutinho fired off-target from a tight angle inside the area.

After struggling to make many inroads in the first half, Liverpool began the second period brightly as Adam Lallana fizzed a 25-yard effort narrowly wide of the left-hand post.

In the 50th minute, Jordon Ibe drilled in a low ball across the six-yard box which Ings could only divert over the bar under pressure.

Jallow threatened again six minutes later, but his effort on the run lacked power and was easily gathered by Simon Mignolet.

The breakthrough finally arrived when James Milner flicked Ibe's cross into the path of Origi who turned and rifled home, before Coutinho's shot took a kind deflection which diverted the ball into the top-right corner.