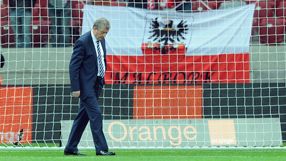 The match could not be played as planned on Tuesday due to a waterlogged pitch after officials failed to close the national stadium's roof despite the city suffering from a sustained storm.

"I had a feeling yesterday that the players were looking sharp. I didn't get that feeling today," Hodgson told reporters.

"Maybe it was because we didn't play well today. I don't want to give the impression that we were hard done by. Both teams were affected."

Hodgson preferred to look at the bigger picture of qualification, where all points are vital and England sit top of Group H on eight points.

"The pitch was difficult and the extra 36 hours in a hotel didn't do us any favours but I'm pleased with a point as we didn't do enough to win.

"Eight points under the circumstances is a fair reflection of what we've done so far and we've got a lot of football to play."

England still managed to protect their 11-match unbeaten run under Hodgson as they moved a point clear of Montenegro in qualifying Group H.

"In a qualifying group there are times that things don't go your way," he said. "It's important to come away from something like that with a positive result."

England face San Marino away on March 22 before a trip to Montenegro four days later.