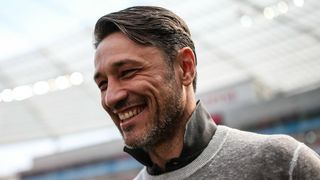 Bobic accused the Bundesliga champions of leaking news of their agreement with Kovac prior to Friday's confirmation of his installation as coach starting next season.

Reports suggesting the Frankfurt manager had been chosen as Jupp Heynckes' successor began to circulate on Thursday, prompting Bobic to criticise the "unprofessional" nature of Bayern's conduct.

But an upset Hoeness rubbished the allegations of a leak, saying the Bavarian outfit had acted appropriately in the pursuit of their former player and timed the decision to soften the impact on Frankfurt.

"We were very professional. We used a clause in Niko Kovac's contract that [Bobic] put in himself. We deliberately told Frankfurt as early as possible so they can get a successor."

While Kovac's hopes of guiding his current club to Champions League qualification suffered a significant setback in a 4-1 loss at Bayer Leverkusen on Saturday, Bayern had no such problems as they cruised to a 5-1 hammering of Borussia Monchengladbach.

Sandro Wagner stood in for the rested Robert Lewandowski and took his chance with a first-half brace, winning praise from Heynckes.

"Sandro gives everything in training and has developed in our system. He is a passionate footballer with a bite to him. I have a lot of trust in him," he said.

"All the boys are in top form right now and that just emphasises the great atmosphere in the squad."