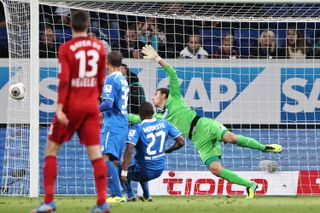 The Bundesliga club have requested the DFB sanction a replay after Stefan Kiessling's 70th-minute header was given as a goal, despite the ball going wide and ending up in the back of the net due to a hole in the side-netting.

The goal was awarded despite protests at the time and it ensured Leverkusen took all three points on Friday.

Hoffenheim have announced an appeal has been sent to the authorities asking for the game to be played again after considering their options.

"The TSG (Hoffenheim) has formally submitted an appeal against the validity of the home match against Bayer 04 Leverkusen (1-2) to the German Football Association (DFB)," read a statement on the club's official website.

"(The) objective of the communicated deadline via mail and fax lawyer's letter is to bring to the positing of a repeated game.

"The decision will make the responsible DFB arbitration."

A decision by the DFB is reported to be expected within two weeks.