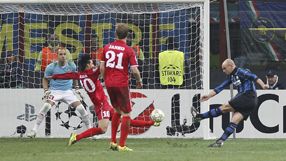 Reports said the Spaniard could be sacked if faltering Inter lost against the Dutch champions but Benitez can now rest a little easier, although a domestic ban for striker Samuel Eto'o following a headbutt complicates Sunday's game with Parma.

The holders have not looked anything like European champions in recent weeks after a string of injuries caused a drop in form but they did just enough and nothing more in the Group A game to stumble through with a match to spare.

"When we are in difficulty like we have been this week, I don't read the papers or watch the TV, we've just concentrated on the job in hand," Benitez told a news conference before being asked if he had seen club president Massimo Moratti.

"He came into the dressing room. Everything is fine."

Midfield dynamo Esteban Cambiasso, among the long list of players to have been struck down by the injury curse, made the difference despite still not being in top shape in a game Inter would have ended up drawing at the nadir of their bad patch.

His 55th minute goal had a huge hint of fortune about it, something the treble winners have been lacking lately when every little turning point has appeared to have gone against Benitez.

Wesley Sneijder's free-kick was deflected into the path of Argentina's Cambiasso, who coolly fired home to spark a collective sigh of relief throughout the stadium.

Sneijder and Dejan Stankovic then missed gilt-edged chances to extend the home side's lead and they were almost made to pay when Twente substitute Denny Landzaat shook the bar during a sustained period of late pressure for the visitors.

"In the first half my team played well and when you play well at a team as good as Inter you have to pounce when you have the chance," said Twente coach Michel Preud'homme, whose side must now be content with a berth in the Europa League after securing third spot in the group.

"We'd have liked to have achieved something prestigious."

Benitez would perhaps feel he was due a bit of luck after having a baptism of fire since taking over in June.

Jose Mourinho's feat of winning the Champions League, Serie A and Italian Cup with Inter last season already had the ex-Liverpool coach under pressure and the club's decision not to invest also left him with a stale and slightly small squad.

False steps have continued on and off since, including a derby defeat by AC Milan and the loss at Tottenham Hotspur, while top spot in the group is sti