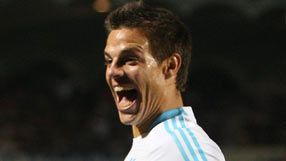 The 21-year-old Spaniard, who had a miserable start to the season after joining from Osasuna for a 7-million euro transfer fee, poked the ball home on the hour in a lively encounter at the Stade Velodrome.

Marseille, with a mostly reserve team, were caught cold as Monaco went ahead in the 22nd minute when Mathieu Coutadeur converted a penalty after Brandao had handled.

The hosts piled on the pressure and levelled three minutes before half-time, with Ghana forward Andre Ayew heading home from a neat Benoit Cheyrou cross.

Marseille pressed hard after the break and Azpilicueta, who had scored an unfortunate own goal in his team's 1-0 defeat against Spartak Moscow in their Champions League opener, scored his first goal for the Provence side.

The Spaniard then cleared off his goal-line in the closing stages of the game.

Earlier, Paris Saint-Germain recovered from a poor start to ease into the last four with a 3-1 win at Valenciennes.

Mathieu Dossevi opened the scoring for the northeners after only three minutes but PSG reacted swiftly as defender Zoumana Camara headed home from a free kick six minutes later.

Christophe Jallet doubled the tally with a low crossed shot in the 26th minute and Peguy Luyindula put the result beyond doubt six minutes into the second half.

Montpellier also reached the semi-finals when a Hasan Salih Kabze double gave them a 2-1 home victory over Lille.

Auxerre reached the semis with a win over St Etienne on Tuesday.

Marseille were drawn to travel to in-form Auxerre for their League Cup semi-final on Wednesday.

If they win, Didier Deschamps's side could meet arch-rivals Paris Saint-Germain in the Stade de France showdown as the club from the capital were drawn away against Montpellier.

Both teams have already met twice this term, Marseille winning the pre-season Trophy of Champions while PSG beat Marseille 2-1 in Ligue 1 last weekend.