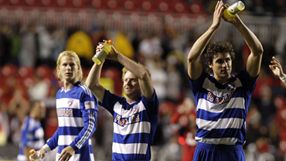 Real Salt Lake, trailing 2-1 from the first leg, could only draw 1-1 with Dallas despite an enormous effort in the final 30 minutes when they lay siege to the Dallas goal.

Dallas had gone ahead in the 17th minute when Brek Shea chested down to Dax McCarty who confidently drove home.

Dallas goalkeeper Kevin Hartman was in inspired form, producing a string of saves to keep his side's two-goal lead intact.

U.S. striker Robbie Findley scored from close range with 10 minutes left to bring Salt Lake within a goal of extra-time but Hartman kept Real out to help Dallas reach the conference finals for the first time since 1999.

Dallas will play the winners of Sunday's other Western Conference game between the L.A Galaxy and the Seattle Sounders. The Galaxy, with home advantage, have a one goal lead from the first leg.

Colorado travelled to Columbus with a 1-0 advantage from the first leg but were headed for an aggregate defeat as they trailed 2-0 with six minutes of regular time remaining.

But a goal from U.S international Conor Casey took the game into extra time and a penalty shootout, where Colorado won 5-4 when Crew defender Brian Carroll missed his team's final kick.

The Crew's Eddie Gaven had levelled the aggregate score in the 22nd minute with a close range effort following a cross from Guillermo Barros Schelotto that caused some confusion in the Colorado box.

Columbus went up 2-0 when Emmanuel Ekpo picked out Robbie Rogers with a superb through ball and the winger showed excellent composure with his finish.

The Crew's hopes began to fade though in the 84th minute when Casey stretched to steer in an Omar Cummings cross at the near post to force extra-time.