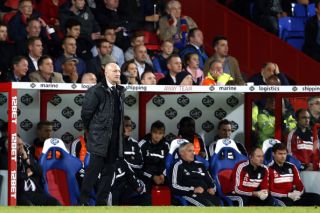 Crystal Palace fans showed their discontent with their manager after the final whistle, shouting 'out, out, out' as well as rudely gesturing towards Holloway as he entered the tunnel.

The fallout came after wonder goals from Fulham's Pajtim Kasami and Steve Sidwell condemned Crystal Palace to their fifth consecutive defeat in the English Premier League, despite taking an early lead through Adrian Mariappa.

Reports suggest Holloway was locked in a 60-minute meeting with co-chairman Steve Parish at the conclusion of Monday's match, where his future at the club was discussed.

The former Blackpool manager emerged from the discussion with Parish describing the downcast mood in the dressing room but defiantly refusing to discuss his future, believing he can drag the club out of their predicament.

"It's totally and utterly flat as a pancake in that dressing room," Holloway said.

"No-one wants to be on a run like this but it's happening, so we need to buck up, stick together and do something about it.

"I'm not talking about my future at the football club - only what's best for Palace, which is all I've ever done.

"I feel exactly the same way as the fans and if they want to moan at me, no problem.

"But I'm a very positive person and I still believe we can turn this round.

"We've lost five games since we announced our 25-man squad and something's not right - maybe we changed too much but that's what we have to work with until January."

Holloway will again meet with Parish on Tuesday morning but said this was standard practice following a game.

"I will be speaking to him on Tuesday morning when the lads are in," Holloway said.

"It is about what is right for the football club and that is what it will always be about between me and Steve.

"We will talk about some bits and pieces and learn from it. That is the meeting and that is what we always do."