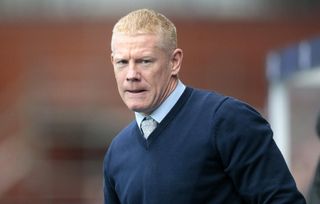 Livingston assistant manager David Martindale has played down the severity of Gary Holt’s condition after the Lions boss was forced to miss their 2-1 Ladbrokes Premiership victory over St Mirren.

Holt, 46, was admitted to hospital after suffering an injury during the week and has been receiving treatment for several days.

However, it is hoped the former Scotland international will be in a position to return to work on Monday.

Martindale revealed that Holt was among the first people to text him following Livi’s hard-fought triumph over the Buddies and hopes he has lifted the manager’s spirits.

“Gary [Holt] is OK and hopefully he’ll get out of hospital on Monday,” explained Martindale.

“He was meant to be getting out on Thursday morning, then Friday morning and then Saturday morning. But he should be here by Monday and back at work. I’m not a doctor but I’m told it’s nothing too serious.

“Hopefully that result has made him feel a bit better. The performance was great.

“Nothing really changed today to be honest. Me and Holty speak all the time so we had a good idea of what the team would be.”

He added: “Gary has texted already – we’ve got a group chat going.”

Alan Lithgow and Lyndon Dykes hit the net either side of the break to give Livi a two-goal lead and, although a Kyle Magennis wonder-strike ensured a nervous finale, the hosts held firm to extend their unbeaten run in all competitions to nine games.

They are riding high in third spot going into the international break, making an early mockery of predictions they would toil in their second season in the Premiership following the loss of Liam Kelly, Craig Halkett and Declan Gallagher.

Martindale added: “We use people writing us off as a wee bit of motivation. Our target this year, though, is just to stay in the Premiership.”

St Mirren boss Jim Goodwin was irked by the sloppy nature of the goals the Buddies shipped, with the opener, in particular, “unacceptable” in his eyes.

Lithgow was left completely unmarked in the box to head home an Aymen Souda corner kick and Goodwin believes that was night and day compared to the laudable, stubborn showings in recent weeks against Aberdeen and Rangers.

“I couldn’t say we lost the game because of a lack of fight or a lack of effort but the goals we conceded were poor,” Goodwin said.

“We took a lot of plaudits in our last three league games for how resilient and hard to beat we were and we did not give a great deal away.

“But that initial corner, for Lithgow to be free in our six-yard box to have a free header is unacceptable.”