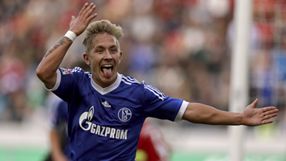 The 22-year-old midfielder joined Tottenham on Monday after the North London club agreed a fee with Schalke to bring forward Holtby's move which had originally been agreed for July when his contract with the Bundesliga side expired.

Holtby's inclusion is a boost for Tottenham who have lost only once in 11 Premier League games but suffered a surprise 2-1 FA Cup defeat at Leeds United on Sunday.

Jermaine Defoe, who missed the Leeds defeat with a back injury, is also available for the match at Carrow Road against a Norwich team smarting from a cup defeat at the hands of minor league Luton Town on Saturday.

"Jermain's body feels well, he feels fine about his fitness and he trained today," manager Andre Villas-Boas said on Tuesday. "He's disappointed that he had to miss Leeds but we've seen excellent work by the medical department to get him back.

"He's selected for Norwich and Lewis Holtby is in the squad as well."

William Gallas is also fit again after a calf problem.

Tottenham are in fourth position in the Premier League, four points behind Chelsea and three ahead of Everton.