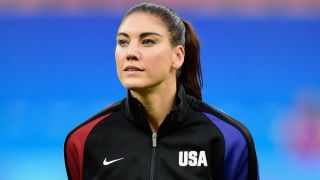 The US Soccer Federation will have a new president in 2018, and iconic former women's international goalkeeper Hope Solo has thrown her name in for consideration.

US Soccer president Sunil Gulati announced on Monday that he would not run for re-election after watching the men's team fail to qualify for the 2018 World Cup in Russia.

Solo – who earned 202 USWNT caps up until 2016 – revealed via Facebook on Thursday that she plans to run, laying out a plan to help the country succeed in football, having failed to qualify for the World Cup for the first time since 1986.

"Ever since I was a young girl, all I ever wanted to do was to play soccer for the United States at the highest level," Solo wrote.

"I wanted to win a Word Cup and play in the Olympic Games. What we have lost in America is belief in our system, in our coaches, in our talent pool, and in the governance of US Soccer. We now must refocus our goals and come together as a soccer community to bring about the changes we desire.

"The time for talking is over. I have been traveling internationally learning and speaking about many of these issues. I have met with foreign national soccer teams, player associations and unions.

"I have met with Presidents and members of the United Nations to discuss leadership and the importance of sport in the world order.

"Through all of these experiences, I have learned that it is the responsibility of those in leadership positions who have the ability to change policy to stop giving lip service to the issues, but to instead, execute and take the actions required to affect real change.

"Given the opportunity, as President of the USSF, I will make these changes."

Solo later described a four-part campaign plan, including women's equality, which is an issue she has been outspoken about throughout her playing career.

"Soccer is the world's game, and I want to share it with all of America," the 36-year-old added.