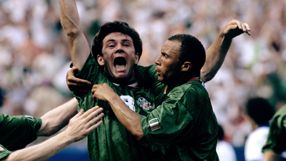 "There is a feel-good factor about the national team in Ireland. They will get behind their team and it will alleviate the current situation," Houghton told Reuters in an interview.

"The anticipation and the build-up in Ireland is much bigger than what it is in England, where I live now," said the former Liverpool and Aston Villa midfielder, who scored Ireland's first-ever goal at the European finals against England in 1988.

Ronnie Whelan bettered that effort with a spectacular volley in a 1-1 draw with Russia and the Irish were unlucky to lose to eventual winners Netherlands as they failed to progress in the eight-team tournament.

After an absence of 24 years, Ireland beat Estonia in the play-offs to qualify for only the second time and are drawn in Group C against Croatia, Spain and Italy. The Irish will play all their group games in Poland.

Houghton believes that they will have to take something from their opening game against Croatia on June 10 in Poznan to have any chance of progressing.

"We have to remember that Ireland are up against the last two winners of the World Cup in Spain and Italy, so that first game is hugely important. If we don't take something there, we'll struggle," he said.

Capped 73 times by Ireland, Glasgow-born Houghton was the architect of two great opening results for Ireland - his header against England in the 1988 win and the looping shot against Italy at the 1994 World Cup in the United States, giving Ireland another precious 1-0 triumph.

"I never get tired of talking about those goals but hopefully in the future someone else will come along and do something similar," he said.

Now 50 and working as a television pundit for Irish TV station RTE, Houghton was at the Bernabeu on Wednesday to see Spanish leaders Real Madrid go out of the Champions League semi-finals on penalties to Bayern Munich but he does not see it as a sign of weakness in Spanish football.

"In fairness, I'd have preferred it if Barcelona and Madrid had both qualified for the final," he said.

"Now they've both gone out and the league is all but settled, so the Spain coach will be hoping that some of his players can get some rest before the finals."

Asked which of the Irish players he thought would make the biggest impression at Euro 2012, he singled out winger Aiden McGeady, who started his career at Celtic but now plays for Spartak Moscow in Russia.

"I think Aiden could do it - sometimes he lacks discipline and his final ball is not always great, but he's improved a lot since moving to Russia and gotten stronger.

"This could be the tournament where he shows his potential."

Another one to watch is Sunderland winger James McClean.

"I'm not sure if he'll make the squad but I think he should go. He could give us that little extr