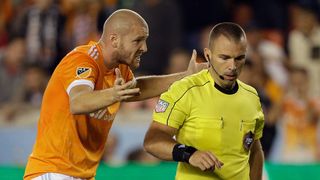 Bob Bradley's side looked set to move ahead of Dallas and leaders Sporting Kansas City when Mark-Anthony Kaye added to Latif Blessing's opener five minutes from time, but Houston struck twice in quick succession at the death to edge closer to the top six.

After lightning storms in Texas delayed kick-off by an hour, Los Angeles took the lead inside five minutes when Blessing found the bottom-right corner off Adama Diomande's throughball.

The hosts pressed for a leveller, but LAFC doubled their lead with 18 minutes remaining when Kaye ran clear to score with former-Hull City forward Diomande again the provider.

Houston did not give up and Manotas breezed past Laurent Ciman to score his ninth MLS goal of the season and what appeared to be a likely consolation in the 94th minute.

But the Dynamo completed a dramatic comeback six minutes into stoppage time, former Arsenal defender Senderos' deflected volley at the back post rescuing an unlikely point.

Better late than never.All the goals from tonight's wild comeback in Houston. July 4, 2018

LAFC will aim to bounce when they host struggling Orlando City, while Houston return to the BBVA Compass Stadium to face Minnesota United on Saturday.