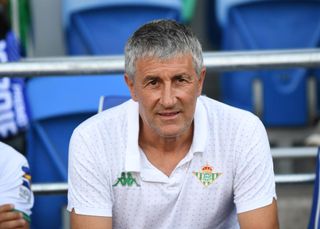 Barcelona have appointed Quique Setien to replace Ernesto Valverde on a contract until the end of the 2021-22 season.

The 61-year-old former Racing Santander and Real Betis boss takes over with the Catalonia club top of LaLiga.

Setien started his playing career with hometown club Racing Santander and would go on to appear over 350 times for them during two stints. A central midfielder with an eye for a goal, he would also begin management at El Sardinero too in 2001 when they were in the Segunda Division. One of his best moments with Racing occurred when he returned there in 1992 and led them to promotion back to LaLiga as a player and he achieved the same feat during his first campaign as a manager there.

After eight years with Racing, Setien moved to Atletico Madrid in 1985 and it was here when he earned international recognition and won three caps for Spain. He also went to the 1986 World Cup, but failed to appear off the bench. He only remained with Atletico for three years, but won the Spanish Super Cup in his first term and also helped them qualify for the UEFA Cup.

Setien’s coaching career started with Racing, but he moved to fellow Segunda Division side Polideportivo Ejido and then he next became an international manager. For a short period of time in 2006, he was in charge of Equatorial Guinea before a spell as Logrones manager, which ended with his dismissal in 2008. The first break for the experienced coach finally happened with Lugo, where he guided them to the Segunda Division and kept them there before departing for Las Palmas – who were in LaLiga – and leading them to survival. Real Betis took note and appointed him in May 2017 and Setien guided them to Europa League qualification in his maiden season.

Whilst in charge of Betis, Setien was linked with a switch to the Nou Camp in January 2019 after implementing an attractive style of play at the Sevilla-based club. In November 2018, he stunned Valverde’s men with a 4-3 victory. Setien also received a signed shirt from Sergio Busquets during one of these visit to the Nou Camp with the Barca midfielder writing: “For Quique with love and admiration for your way of looking at football. All the best.” Meanwhile Setien’s philosophy has been influenced by the late Johan Cryuff.

The experienced manager is a big admirer of chess and is understood to have played against former world champions Anatoli Karpov and Garry Kasparov, although the results of these meetings have not been disclosed. The strategic style of chess can be linked to football and this is a view shared by Setien, who has long been a fan of the board game.