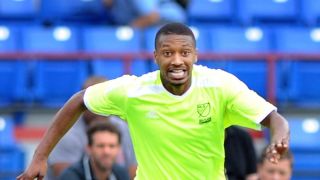 In the course of a few days, the former UNC - Chapel Hill fullback heard his name called at the MLS SuperDraft, learned where he’d play this season and started the process of moving his life to Massachusetts.

McCrary took a few minutes to speak with Inside MLS after his first training session with the Revs to offer a glimpse into the chaotic period.

A trip to Philadelphia determines his fate …

McCrary traveled to the MLS SuperDraft to learn his fate after a distinguished, four-year career with the Tar Heels. He spent the previous weekend at the MLS Player Combine and tried to impress all 20 clubs over the course of three matchdays and a series of interviews.

It all worked out nicely for the 22-year-old defender: New England selected him with the 10th overall pick to strengthen its fullback options. McCrary said he spent most of that day -- and some time over the next couple of days in Georgia -- dealing with requests and preparing for his transition.

“I was just so excited, for one,” McCrary said. “I was happy to go through all of the interviews. It was a great experience for me and my family. I went back home and it was the same thing: A lot of reporters calling me for interviews, as well as a lot of friends and family giving me praise and support.”

… and sets the stage for a quick turnaround

Once McCrary returned to his home in Marietta, Georgia, he started to shift his focus to the task at hand. New England -- like several other MLS teams -- opened training camp on Jan. 22, the first permissible date under the Collective Bargaining Agreement.

The compressed calendar gave him about a week to establish the groundwork for his first steps as a pro. His top priority: making sure he carried through the work from the MLS Player Combine and sorted out his responsibilities on the field.

“When I went home, the first thing I thought was, ‘Well, I’ll be reporting in a week.’ I got a little running in, tried to get my touches going and tried to break in some cleats so I could get prepared for this,” McCrary said.

In addition to his demands on the field, McCrary needed to sort out his life off of it. He received the necessary travel information from the Revolution soccer operations department and started the process of winnowing his life down to a suitcase before his trip to New England.

“I got in contact with [Revolution soccer operations coordinator] Tyler Fletcher,” McCrary said. “He told me the flight was pretty much the next week [Jan. 21]. I went through all of my stuff and tried to pack up as much as I could. I had to leave a lot, too. I just came up here with a bunch of clothes, thinking I’m about to start a new life here in Boston.”

The first day arrives with a perk …

McCrary arrived in Boston on Thursday morning and reported to Gillette Stadium on Friday with the rest of his new teammates. Revolution medical staffers carried out the entrance physicals, while coach Jay Heaps spoke with his players for the first time ahead of the 2016 season.

Once those obligations were sorted, McCrary and a few of his new teammates headed into the city before taking the field for the first time on Saturday.

“I was hanging out with the other guys: Michael Gamble, Josh (Phillips) and Femi (Hollinger-Janzen),” McCrary said. “We actually went to the Boston Celtics game. That was my first time going to it. It’s been a great experience so far.”

… while the first training session offers a glimpse at the future …

Training camp opened in earnest on a brisk day in Foxboro. Heaps put his players through their first paces of the new campaign. McCrary turned out with the rest of his teammates, but he spent time soaking up his surroundings and trying to figure out his place in a new setting.

“At first, I just walked into the locker room in awe,” McCrary said. “I sat back, really trying to see how the guys interact and everything. The whole team seems great. We got out here, we got to knock the ball around and run a bit. It just feels good to be on this team. It feels welcoming and everything.”

… while there are still many, many things left to figure out

With the first day out of the way, McCrary can think about the lengthy list of duties ahead. He is headed to Casa Grande, Arizona on Tuesday with the rest of the Revs to jumpstart their preseason preparations in earnest.

The trip provides a reprieve from the decisions ahead. McCrary doesn’t have a car to drive or a permanent place to live when he returns. His parents are planning to sort out the first part, but their willingness to make the lengthy drive from Georgia clears up just one the quandaries ahead as McCrary prepares for a new life.

“I’m still trying to figure all that out,” McCrary said. “We’ll be leaving to go to Arizona. I’ve been talking to a few of the guys about where they’re living, who they live with. I’m trying to figure all of that out. My parents are going to drive up a car for me so I don’t have to get a new one. It’s a process.”

One thing is done and dusted, though: McCrary signed his first professional contract with the Revs and MLS on Monday afternoon.