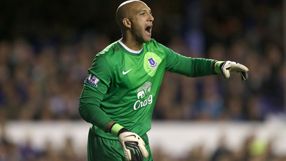 The Toffees have made a superb start to the new season and are currently second in the Premier League following the weekends 3-1 win over Southampton.

The Merseyside outfit are traditionally slow starters, but Howard, who joined Everton in 2006, believes this is the strongest squad he has played with as the club push for a Champions League place.

"The Champions League is a real, viable option for us. Very difficult, but it is viable," he told Sky Sports News.

"We talk about it, we achieved it a few years ago and we have the ability on form to do it. But it is a long way off to May.

"This is my seventh season. I think it is the best squad we have had, in terms of quality from top to bottom.

"You would have to ask the manager his opinion on that but I get the feeling from being around the guys in training and in matches that it is the most talented squad we have had.

"Does that give us the best chance? Maybe, because our grit and determination is always there and that is an Everton trait. Maybe this could be our year."

Recent speculation has linked star duo Marouane Fellaini and Leighton Baines with moves away from Goodison Park, and Howard believes it is pivotal to hold onto the pairing if Everton are to fulfill their ambitions.

"The one thing I hang my hat on is that our manager will dig his heels in and if you are going to pluck our best players you will have to pay a high price," the goalkeeper added.

"He has also shown that if he gets the right money in the transfer window from those sales that he buys very well, but we do not want to lose Marouane Fellaini or Leighton Baines or any of our top players."