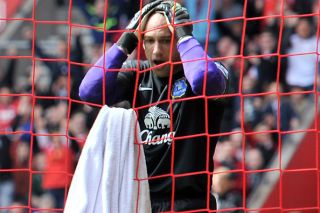 The Merseyside club's quest for Champions League football was dealt a blow on Saturday after they were beaten 2-0 by Southampton in Premier League action at St. Mary's Stadium.

Everton's loss, their second in three games, left them a point adrift of fourth-placed Arsenal with two games remaining, though the London side have played a game less.

Roberto Martinez's men end the season with games against Manchester City and Hull City, and as long as the team are a mathematical chance of finishing fourth, Howard will be fighting to the very end.

"Mathematically we still have a chance so it's not over," said the USA international.

"The thing is not to let it affect us too much and the manager has been brilliant in that regard. He dismisses it quickly; both bad results and good ones. We need a good week of training now and to be focused on what City are coming to throw at us.

"Those games take care of themselves. It will be wide open with some top players on display.

"Those are the easy games to play in. Gareth (Barry) won't be there but we can cope."

Saturday's defeat at Southampton was stunning in all aspects, with Everton conceding two own goals in the first half.

Defender Antolin Alcaraz was the first player to send the ball into his own net, heading Rickie Lambert's cross past Howard inside the opening minute before Seamus Coleman got in on the act on 31 minutes.

And the former Manchester United shot-stopper said he was baffled by the display.

"Sometimes it is (hard to fathom) because it was so unlike us," he said. "We just weren't ourselves.

"The disappointing thing was the performance; two own goals, you can't legislate for that and we just weren't at the races.

"We've banked on performances this year to dig us out of holes and get us back on top of games but it just wasn't there. The second half was better but quite honestly it couldn't have got any worse.

"We just need to push this aside and hope for the best with the six points remaining."