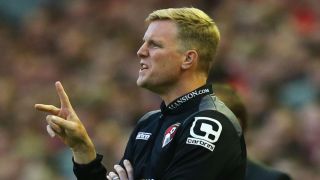 Christian Benteke scored the winner for Liverpool in the 26th minute but - under new regulations introduced this season - Philippe Coutinho should have been flagged offside for his own attempt to connect with Jordan Henderson's cross.

The incident followed an earlier situation where Bournemouth captain Tommy Elphick had a goal disallowed after being judged to have impeded Liverpool defender Dejan Lovren.

"It is hugely frustrating," he told Sky Sports. "We were in the game, the big decisions have gone against us.

"The first was a goal by Tommy. If that is a free-kick then we will see free-kicks every time there is a corner.

"The new offside rule is a grey area. Under the new rules that is clearly offside. Our goalkeeper was affected by the player in front of him.

"We had a few chances tonight but the big positive is overall our performance. We know if we perform like that the results and goals will come.

"The players are winners and this is an experience we don't want to get used to.

"I am very proud of the performance and the players. You can't beat the decisions and the two big ones have cost us points. It is unforgiving."