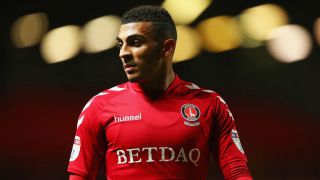 Huddersfield Town have secured the signing of striker Karlan Grant from Charlton Athletic in a reported £2million move.

The Terriers, who lost 1-0 to Everton on Tuesday in Jan Siewert's first game in charge, are bottom of the Premier League and have struggled for goals throughout the season, scoring just 13 in the top flight.

Huddersfield will hope Grant can aid their survival bid after he signed a three-and-a-half-year deal at John Smith's Stadium on Wednesday.

"This club believes in talented young players and Karlan certainly fits that description," Siewert said. "He's a player I'm delighted to have the chance to work with."

The 21-year-old forward joins the Terriers for an undisclosed fee, putting pen-to-paper on a contract running until the summer of 2022.