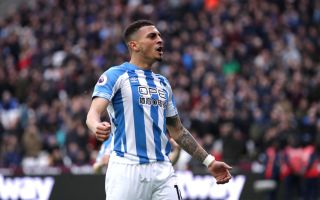 Huddersfield climbed out of the relegation zone with a battling 2-1 Yorkshire derby victory at home to Barnsley.

Goals from captain Christopher Schindler and leading scorer Karlan Grant did the damage as the Terriers stretched their impressive unbeaten run to six games and condemned Barnsley to their longest winless league run for 48 years.

Midfielder Jacob Brown pulled a goal for the visitors with 11 minutes remaining, but Danny Cowley’s side held on for a third league win of the season.

That meant Cowley’s team jumped two places in the standings and left strugglers Barnsley rooted to the basement after a worrying eighth league loss.

They have now not won in their last 13 games, their worst run in the league since 1971.

German defender Schindler’s first goal for a year in the first half and Grant’s third goal in four games, shortly after the restart, made sure the hosts toasted an afternoon to remember at the John Smith’s Stadium.

Cowley made three changes to his side which drew 0-0 at home Middlesbrough on Wednesday night.

With only two days’ rest ahead of the visit of the Tykes, Cowley shuffled his pack and handed starts to midfielder Juninho Bacuna and striker Fraizer Campbell.

Goalkeeper Kamil Grabara recovered from illness to start between the posts in place of Ryan Schofield, the 19-year-old teenager who starred on his league debut for the club in midweek.

The Tykes were unchanged following their impressive 2-2 draw at West Brom on Tuesday night.

It was the visitors who started brightly with defender Dimitri Cavare having a shot blocked in the box after only six minutes.

Former Manchester United striker Campbell had a penalty appeal turned down by referee James Linington midway through the half after a challenge from Kenny Dougall.

At the other end, striker Cauley Woodrow powered a right-foot shot well wide of the right upright.

The opening goal came after some excellent work from Grant. The on-song striker cut the ball across the face of goal from the right byline and the unmarked Schindler was waiting to slot home at the back post.

It was the defender’s first goal since scoring in a 1-1 draw with Burnley in the Premier League last season.

Cameron McGeehan shot over the bar from point-blank range as Barnsley countered, but his effort wouldn’t have counted anyway, with the midfielder adjudged to be offside.

Excellent work from midfielder Lewis O’Brien led to Huddersfield’s second, his trickery teed up Grant who, after a lovely turn, curled the ball sweetly into the top-right corner with a stunning finish.

It should have been 3-0 but Elias Kachunga blazed over in the box after keeper Brad Collins had pulled off a superb parried save to deny Grant a brace.

Dougall went close to pulling a goal back with a thunderous free-kick which flew wide of the left upright.

Kachunga had another great chance to score but he dragged his right-foot shot wide from inside the penalty area.