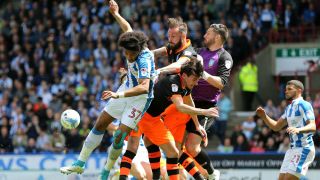 Izzy Brown was guilty of missing the only clear chance of a tense Championship play-off semi-final first leg as Huddersfield Town drew 0-0 with Sheffield Wednesday.

The hosts enjoyed more possession and the best of the openings at the John Smith's Stadium on Sunday, but they were unable to truly test Owls goalkeeper Keiren Westwood.

Chelsea loanee Brown had the best opportunity to do so midway through the first half as Nahki Wells' flick-on found him in the penalty area, but the 20-year-old's shot clipped the top of the crossbar from 12 yards.

Wednesday – who did the double over the Terriers this term – offered little in the attacking third before the break and remained on the back foot as Huddersfield looked the more likely to break the deadlock.

Wells nearly caught Westwood out just before the hour with a chipped attempt, the Republic of Ireland international able to just get back and paw the ball over.

Moments later the visitors finally recorded their first shot of the match as Adam Reach found space to unleash a strike that fizzed past Joel Coleman's left-hand post.

It was as much as Carlos Carvalhal's men could muster, though, despite the introduction of former Terrier Jordan Rhodes, with the Owls holding on to leave the semi-final well poised heading into the second leg on Wednesday at Hillsborough.