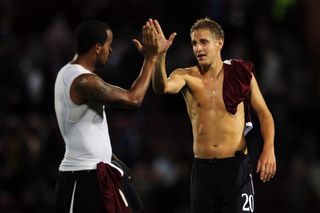 Dawson ended a near 10-year stay at Tottenham earlier this week when he completed a move to the KC Stadium.

And Huddlestone is surprised the White Hart Lane club were willing to part company with the defender, who featured in 32 Premier League games last term.

"I was surprised Spurs let him go to be honest, because even last season he played near enough every game for them," said Huddlestone.

"It was a bit of a surprise because he's only 30 so hopefully we can get three or four good years from him.

"Spurs' loss is our gain. They've obviously got a new manager [Mauricio Pochettino] who is trying to do things his own way and wants his own players, which is fair enough, but hopefully we can benefit from that.

"Daws brings leadership, he's very good on the ball. Defensively he is very clever and obviously he's not been at Tottenham for 10 years for no reason."

Dawson made 324 appearances for Tottenham in all competitions after joining from Nottingham Forest as a 21-year-old in 2005.