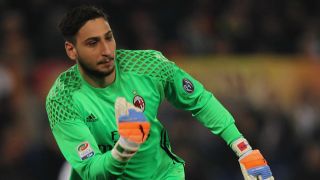 City announced over the weekend that long-serving defender and crowd favourite Pablo Zabaleta will leave the club when his contract expires next month – a departure expected to be the first of a busy close season at the Etihad Stadium.

Gael Clichy, Bacary Sagna, Yaya Toure, Jesus Navas and Willy Caballero are all senior players who will be out of contract, while Caballero's fellow goalkeeper Joe Hart is expected to seal a permanent move elsewhere having spent the season on loan in Serie A with Torino.

While the England international has experienced mixed fortunes in Italy's top flight – more than can be said for his flailing City replacement Claudio Bravo - Donnarumma's star has continued to rise at San Siro during a season where he made his senior international breakthrough with Italy.

Reports by The Sun claimed City are keen to lure Donnarumma to the Premier League, with the 18-year-old only having a year left on his current Milan deal and Guardiola is a fan.

"Donnarruma is a top, top goalkeeper, definitely," he told a pre-match news conference ahead of Tuesday's match with West Brom. "He's big, he has huge skill for 18 years old."

Madrid midfielder Isco has been more readily linked to City than James, with the Colombia star and reported Manchester United target fuelling speculation he will seek pastures new by applauding all four sides of the Santiago Bernabeu after Sunday's 4-1 LaLiga win over Sevilla.

James has failed to nail down a regular starting spot under Zinedine Zidane but has hit prime form as the Madrid boss has rotated his line up over recent weeks, scoring six times in his past 10 league outings.

Asked whether the 25-year-old would be a success in the Premier League, Guardiola said: "Absolutely. There is no doubt about his quality.

"It would depend on him and his team-mates whether he played well or not but good players can play anywhere."

A first-half penalty in Saturday's 2-1 win over Leicester City took Jesus to five goals in six Premier League starts for City and Guardiola feels the youngster's work rate and desire to improve bode well for club and country.

"He is 20 years old. We analysed the wrong things he did against Leicester because his gap to improve is huge and we want to help him to be the best player possible," the former Barcelona boss added.

"It will be no problem because he is a guy who is so open-minded. He has a mentality to help the team – he will lose a ball and doesn't go there to complain to his team-mates, just runs back to fight for every single ball. I love it.

"Also the way he listens to his team-mates like Fernandinho, who he talks to because he is Brazilian. You see he wants to become a great player, a better player than he is right now.

"When that happens, you just can be there to help him. That's all."