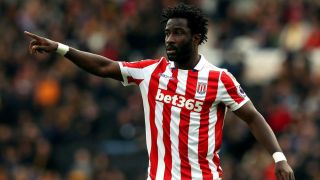 The Ivorian - on loan from Manchester City - has struggled to make an impact at the bet365 Stadium as Stoke made a slow start to the season, with his last goal coming back in December.

However, after Hughes' side registered back-to-back wins over fellow strugglers Sunderland and Hull City, the Welshman is hoping Bony can also get back on track against a club he struck 26 times in the Premier League for.

"Wilf is getting better; in every game he's having more of an impact," he told a pre-match news conference.

"Clearly we want him to start hitting the back of the net and that's what Wilf wants himself. He's a little bit frustrated at the moment, because that's clearly the part of his game that he wants to make an impression with.

"Up to this point he hasn't been able to do it, but maybe, against his old team, that's the game that's going to get him up and running.

"You think of the amount of time that happens, when a former player comes back and haunts you as a manager, and you never know - Wilf might be able to do that to Swansea. Let's hope so."

Another Stoke forward enduring a tough campaign is Peter Crouch, who has started just once in the league this term and hit the headlines as he jokingly responded to a fan's tweet about FIFA 17 by posting: "At least I'm getting a game somewhere."

Hughes, though, was amused by Crouch's quip and has sympathy for his out-of-favour front man.

"Pete's quite sharp on Twitter, so I always keep a look out once people tell me he's been on there," Hughes said. "Usually it's quite amusing.

"It's probably true; he's a little bit frustrated, but it is what it is. He's showing good signs in training. When it's the right time to introduce him again then we'll do that.

"But he's just got to be patient like a number of other people at the moment, because we're winning games and playing well so it's difficult to break in."