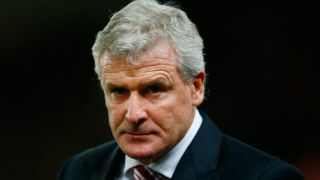 Stoke City manager Mark Hughes believes British managers are getting looked over for jobs at the big clubs in England.

Hughes was sacked after one season at Manchester City in 2008-09, and has since managed Fulham and Queens Park Rangers, before taking over at Stoke in 2013.

None of the top-six clubs in the Premier League table have British managers, with 12 out of the 20 clubs in the league employing a foreign manager.

Hughes said it has become increasingly harder to win trophies as a British manager.

"There's a debate around British managers and the opportunities they have," he said.

"If you look over the years, the top jobs in this country haven't really become available.

"At Man United, Sir Alex [Ferguson] was there for a long time, Arsene Wenger's still in situ [at Arsenal], Chelsea don't appoint British managers and Man City was an opportunity which unfortunately was taken away from me.

"A lot of foreign managers are able to build their CVs domestically, so when people look, they can see they've won cups and leagues -- for British managers, that is a bit more difficult."

Stoke are preparing to face Liverpool in the first-leg of their League Cup semi-final on Tuesday - the first time they have reached that stage of competition since they won it in 1971-72.

And Hughes, who won several trophies as a player with United, Chelsea and Blackburn, is hoping he can do it as a manager,

"I remember those emotions, the excitement and pride you get from winning things, and I'd love to be able to do it as a manager," he said.

"I got to a League Cup semi-final at City but got sacked before we played it, although that's another story.

"I haven't been able to make that next step and I would love to get some silverware.

"I had a fantastic playing career and that was the norm for me -- that was what my expectation was."