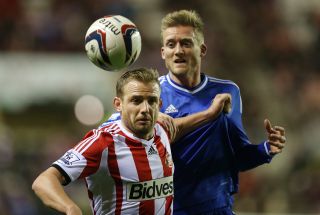 The 25-year-old midfielder emerged as a reported transfer target for Hughes earlier this week.

However, Hughes believes the former Middlesbrough man is unlikely to move to the Britannia Stadium in January, following his impressive performance at Old Trafford on Wednesday as Sunderland made it past Manchester United in their League Cup semi-final.

"Given the fact that Sunderland had a fantastic result the other night, and the player you mention (Cattermole) played really well on the night, I think it's highly unlikely it will happen," said Hughes.

Sunderland boss Gus Poyet insists his club have not received a bid from Stoke, or elsewhere, for Cattermole.

"There have been no offers at all for Lee Cattermole," said the Uruguayan.

"I try to be helpful when I can be to the media over transfers, although it is important I do not say anything which might affect a transfer.

"But in this case, it is an easy question for me to answer: we have definitely not had an offer for him."

Hughes, meanwhile, has once again made it clear that striker Peter Crouch, a player linked with moves to QPR and Crystal Palace, will remain at Stoke.

"His sale is not an option," Hughes stated.