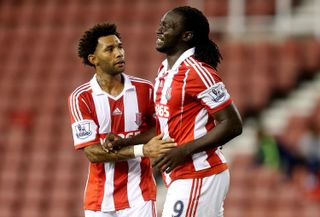 The Trinidad and Tobago international striker turned in a match-winning performance against Walsall on Wednesday in the League Cup, scoring a hat-trick as Stoke won 3-1 at the Britannia Stadium.

Hughes has opted to deploy Peter Crouch as the side's leading striker in the club's opening two Premier League fixtures against Liverpool and Crystal Palace.

But the Welshman concedes that Jones has played himself into contention ahead of Saturday's match with West Ham at Upton Park after his midweek treble.

"Kenwyne was absolute fantastic (against Walsall)," he said.

"He is enjoying the work he is doing at the moment, and he has certainly given me a headache ahead of Saturday's game. He made a real claim for a starting spot."

Hughes also confirmed he is looking to send goalkeeper Jack Butland out on loan.

The 20-year-old signed a permanent deal with the club in January from Birmingham City and spent the remainder of the campaign on loan at St Andrew's.

With Asmir Begovic and Thomas Sorensen currently above him in the pecking order, Hughes is looking to secure Butland another temporary move.

"Ideally we would like to get Jack Butland out on loan to help his development," he added.

"It has to be the right club though. He is learning a lot here with Asmir, Thomas and Andy Quy our goalkeeping coach."