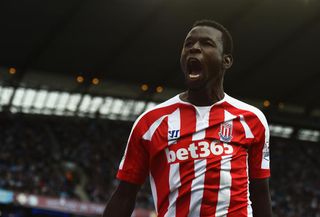 Senegal striker Diouf, a close-season arrival from Hannover, opened his account for his new club in some style with a landmark strike on Saturday.

Stoke had failed to score or claim a point on six previous Premier League visits to the Etihad Stadium, but secured victory on this occasion courtesy of Diouf's 58th-minute goal, which saw the 26-year-old run with the ball from inside his own half before beating England goalkeeper Joe Hart.

"He's come to the club and we've been delighted with what he's shown us in games and in training. But obviously he's a striker and when you come to a new club you want to make an impression as quickly as possible and that means scoring goals.

"He's probably been a little hard on himself. In the couple of games that he's played he's had chances and not taken them but we could see that he was going to give us something that we didn't have last year, which was pace and power on the break.

"We're delighted for him. It was an outstanding goal. I hadn't realised until I'd seen it again how deep he picked the ball up, and he just kept on going.

"You always sensed that he was going to go all the way and get a shot off and thankfully there was enough power on it to beat Joe and we won the game. It's a fantastic goal to win any game."

Hughes' opposite number, Manuel Pellegrini, felt the hosts should have been awarded a late penalty when Yaya Toure went down under a challenge from Erik Pieters.

However, Stoke's boss pointed to a spot-kick appeal from Diouf that was also waved away by referee Lee Mason in the first half.

"Apparently people are saying it's a good call for a [Manchester City] penalty," said Hughes.

"I've not seen that. I saw the one that we should have had in the first half, which I felt was a good call as well, so I'm going to say they even themselves out."

Hughes also played down the significance of tasting victory at one of his former clubs, adding: "I'm just delighted for my team and the fans that were here today. They've enjoyed a fantastic goal and a great performance from their team.

"There's personal satisfaction because that's happened. I have no axe to grind."