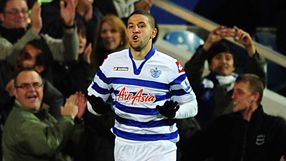 The Morocco international netted within two minutes of appearing as a substitute during Monday’s 2-1 defeat with West Ham United.

It was only the 23-year-old’s second appearance for the R’s this season and despite admitting Taarabt’s attitude has been a cause for concern in the past, Hughes is adamant he is still a key member of the first-team squad.

"Adel [Taarabt] is a talented young man and that talent is recognised here, we support him but he is a young player and sometimes he makes the wrong decisions," said Hughes.

"There are always consequences when you do that but he is in a good place now and we are pleased with what he is producing and as a consequence we will reap the benefit on the pitch.

"Professional football is a way of life and you have to commit to that and it is fair to say that in the past Adel hasn’t made the correct decisions about what he should be doing.

"But I’m very happy with what he is doing at the moment, he is training correctly, training well and having an impact

"Obviously he has been injured in recent weeks so that is why I haven’t been able to play him but he is back now and certainly in my thoughts for the weekend."

Hughes went on to praise Taarabt following his goalscoring contribution from Monday night, adding: "We were very pleased with what Adel produced the other night, I think he came on with a real purposeful attitude to what needed to be done at that point.

"He came on and made an immediate impact and was ready to perform, which is what we want from all of our players.

"He is just a young player, he is still learning the game and still understanding what it takes to be a top professional but he will get there because he has got good people around him and we will support him and make sure he gets to the level that his talent deserves."