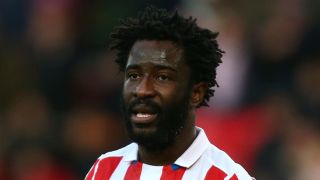 Mark Hughes has urged Wilfried Bony to be patient after the Ivory Coast international described his situation at Stoke City as "crazy".

In an interview with the BBC's World Football programme, Bony claimed his lack of first-team opportunities at the bet365 Stadium "doesn't make sense".

Bony is on loan at Stoke from Manchester City but mustered just two goals in 11 appearances before heading to the Africa Cup of Nations - both against former club Swansea City.

Peter Crouch's renaissance and the arrival of Saido Berahino from West Brom mean Bony is yet to feature since returning from Gabon, but Hughes says the 28-year-old will be given a chance before the end of the season.

"Wilf has been a little bit unlucky," said Hughes. "He had a good run of 11 games I think it was. It's fair to say he didn't score as many goals as he would like.

"He went out of the team then went to the Africa Cup of Nations, with Peter Crouch coming in and doing well and Saido Berahino arriving.

"Wilf has to be patient. All players have to be if they are out of the side. He will get opportunities, I'm sure, before the end of the season.

"Wilf's a good player and a good guy, but sometimes frustration happens. When he gets opportunities he has to take them."

Stoke host Middlesbrough in the Premier League on Saturday.