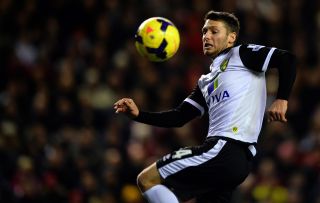 Hoolahan was absent from Norwich's matchday squad for Saturday's 1-1 draw against Fulham at Carrow Road in the third round of the FA Cup.

Villa, managed by former Norwich boss Paul Lambert, are rumoured to have had a £1.5 million bid for the Republic of Ireland midfielder turned down.

However, Hughton insisted Hoolahan missed the Fulham game due to an injury, although he refused to offer specific details.

"Wes reported an injury (on Friday)," said the Norwich boss. "At this moment he is having treatment. It is nothing to do with (him) being linked to other clubs.

"Has there been a bid? Not that I am aware of, absolutely not. At the moment it is a hypothetical situation that you are asking me about.

"We had nine senior players not involved (against Fulham) and my biggest concern is getting those back and bringing new ones in. It is not our intention to lose players.

"There is no news to report in or out. We are working, the same as most teams, and anything we have to tell you we will."

Although Norwich were unable to beat Fulham, Hughton was pleased with the performances of his fringe players and pointed to a fine stop from David Stockdale that denied the hosts' Ricky van Wolfswinkel in the second half.

Hughton added: "It was an outstanding save. From the angle that we had, we thought it was in. It is a wonderful save.

"I thought we gave everything to win the game. We had to make wholesale changes with the injuries we have.

"We had to manoeuvre the team around a fair bit and, taking that all into consideration, I felt we were worthy of the win, if you look at our work in the final third and the amount of balls into the box.

"We conceded a poor goal (to Darren Bent). It is there for all to see. It was a fairly hopeful ball in our box and there was no doubt we should have dealt with it better."