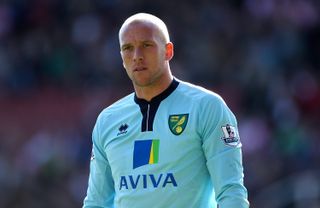 With the scores level at 1-1 entering the 85th minute, the Englishman let a weak Eden Hazard effort creep under his body to gift Chelsea a second, before Willian completed the scoring a minute later.

But Hughton believes that the whole Norwich team should take responsibility for the goal, which came about courtesy of a lightning-quick counter-attack.

"It's our corner and you look at the process from then," said the City boss. "I think there were other opportunities we had to do better, to clear it, to be stronger.

"Certainly now is not the time to apportion blame, it's a team effort and we had various sources to stop it before it even got to John.

"John's a top-quality keeper, I know during that first-half period he had some difficulty with the sun. He's a top-class goalkeeper and has been excellent for us, and I'm sure he'll continue to be."

Despite the disappointing result, Hughton also went on to praise his players' reaction to going behind just four minutes in, as Oscar put Chelsea ahead.

"After conceding a poor goal so early in the game and giving them that momentum, I don't think I could've asked for more effort and determination from the players to get back into the game," he added.

"I'm really disappointed. With the second goal, their power and pace on the counter-attack got the better of us and at 2-1 it becomes difficult."