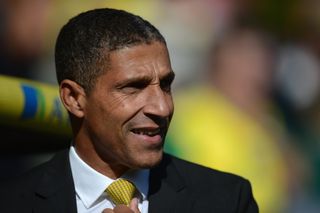 The 24-year-old has been a regular fixture for the Premier League side since joining from Sporting Lisbon in the close-season, but a foot injury may leave him sidelined again on Saturday.

The Dutchman missed the 4-1 defeat against Arsenal but it was hoped he might return this weekend to help reverse a run of form that has seen Norwich lose four of their last five league games.

Hughton will, however, be able to call on Johan Elmander after he recovered from his thigh injury.

"Ricky van Wolfswinkel is touch and go for Saturday," he said. "We'll assess him closer to the game.

"Johan Elmander has been training and is back fit."

The 54-year-old was also full of praise for Cardiff boss Malky Mackay ahead of what arguably represents a relegation six-pointer.

"Malky Mackay has done an incredibly good job Cardiff," he added. "I watched them a lot last year and they fully deserved promotion.

"We all know it's a results business - if we keep playing as we are, we'll be ok."