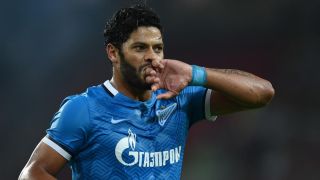 Zenit star Hulk, 29, says he could spend another 10 years at the club should the Russian champions decide to offer a new contract.

The Brazil international is enjoying one of his strongest spells of form since moving to St Petersburg in 2012, having registered 10 goals and 15 assists in just 17 games so far this season.

The former Porto forward has been linked with a potential move in January as a result of his impressive form but he insists he is happy to extend his spell in Russia.

Hulk has credited his upturn in form to a feeling of having adapted to life in Russia after admitting he struggled in the early part of his spell at Zenit.

"At first I was not very happy here," he said. "I'm grateful for the support of general director Maxim Mitrofanov and club president Alexander Dyukov, who persuaded me to stay.

"I finally feel completely adapted to both the city and the club. Now, this is my home. I have a great relationship with the fans, with the other players, with a club that makes me feel confident."