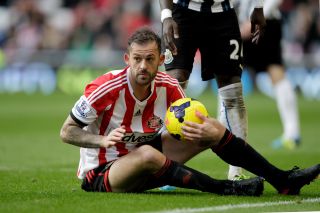 Bruce is said to have targeted the Scotland international as the man to add some firepower to his Hull side this month.

Sunderland manager Gus Poyet has spoken of his desire to keep Fletcher as the Wearside outfit battle to stay in the Premier League, but the Uruguayan did not rule out selling the former Wolves man for the right price.

Bruce has made no secret of his desire to bolster his forward line, but denied making an offer for Fletcher - who has also been linked with Scottish champions Celtic.

He told talkSPORT: "I woke up this morning and saw a story that we’d bid £8 million (for Fletcher),

"I just thought, 'where on earth have they got that from'? I haven't got a clue where it's come from.

"It's no secret we want to improve up front,

"We've got a couple of irons in the fire and, if they come off, then it would be fantastic. It would give the squad a lift by adding a striker.

"I've said for years that you're only as good as your strikers. That’s the hardest part of any side to fill. Anyone we bring in has to improve our team though."