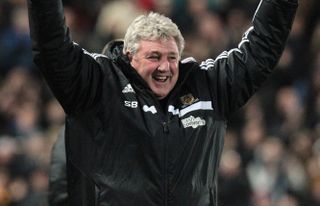 The two strikers completed moves to the KC Stadium this week from Everton and West Brom respectively, for a combined fee believed to be in the region of £14 million.

Bruce cannot wait to see his new attacking options in action and has likened their arrival to his capture of a World Cup winner at Birmingham City 11 years ago.

"It's certainly as exciting as when I signed Christophe Dugarry for Birmingham, a World Cup winner with 55 caps for France," said Bruce.

"He lit the place up and I hope these two can do exactly the same. That's why I've spent the money on them.

"I think we've got a terrific deal for the pair of them, I really do. I just hope they can go and prove me right."

Bruce feels the signings of Jelavic and Long represent another step in Hull’s rapid progress since he arrived at the club in June 2012.

Having gained promotion to the Premier League in the former Manchester United defender's first season at the helm, Hull now sit 10th in the top flight.

"Eighteen months ago I knew the balance of the squad wasn't right," said Bruce. "If you compare the squad then to now, it's light years apart. That’s how far we've come.

"It doesn't just stop because we've signed these two players. It's always got to evolve so we can get bigger and better. That's my aim for this club, to make sure we are here (in the Premier League) to stay."