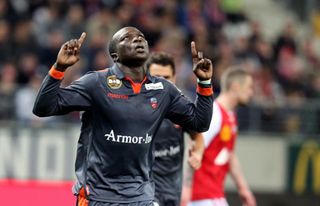 Aboubakar scored 16 league goals in a Lorient side that finished eighth in Ligue 1 last season, and the 22-year-old went on to feature in his country's dismal World Cup campaign in Brazil.

Ahead of Hull's UEFA Europa League play-off first leg against Lokeren in Belgium on Thursday, Bruce admitted that the club are in preliminary talks with the forward, although no offer has yet been made.

"He is someone we are aware of and he is a very good player, but whether something materialises I am not sure," he told the Hull Daily Mail.

"We haven't made an offer, but we have had conversations. But at this stage we've had six or eight conversations with clubs and different players."

Hull were rocked by the news on Wednesday that new signing Robert Snodgrass will be out for up to six months with a dislocated kneecap, suffered in the 1-0 Premier League win at QPR on Saturday.

Added to the departure of Shane Long to Southampton last week, Bruce has been forced into action in the transfer market.

"We have lost two very decent players in Long and Snodgrass in the past week, so we will keep looking," he said.

"There are two or three offers that have gone out, so we will see. Before the end of the window we have to bring someone in.

"We have lost Robert Snodgrass now for six months which is a massive blow for us. So we will have to be in the market because we have been forced to."