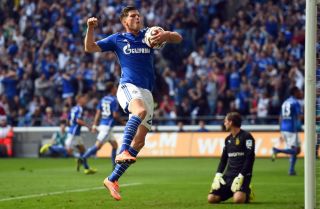 The Netherlands international's deal at the Veltins Arena was due to expire in June, but he has now agreed to extend his stay in Gelsenkirchen until 2017.

Huntelaar has been prolific in front of goal for Schalke since his move from Milan in 2010, proving himself in one of Europe's biggest leagues after struggling in Serie A and La Liga.

Huntelaar helped Schalke to win the DFB-Pokal in 2011 and the former Ajax and Real Madrid man has maintained his strong form in front of goal in 2014-15.

The 31-year-old has netted 10 times in all competitions for Roberto Di Matteo's men this season.

Schalke sat fifth in the Bundesliga prior to Saturday's visit of Hamburg.