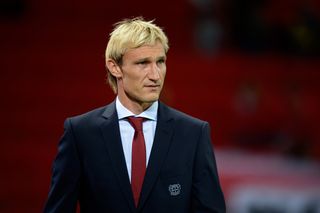 The Finn spent 10 years at Anfield, winning the UEFA Champions League during his stint with the club, before starting his managerial career at the BayArena in 2012 after ending his playing days with the German side.

Leverkusen finished third in the Bundesliga under Hyypia last season and have started the new domestic campaign strongly, winning six of their seven games to sit third behind Borussia Dortmund and Bayern Munich.

While Hyypia remains committed to the cause at Leverkusen, he has stated his desire to manage both Liverpool and the Finland national side.

"I have got two special places in my heart," he told Bild.

"I was born in Finland, and there the job as the national team coach is the biggest job. Liverpool has the other place in my heart.

"I don’t want to say, 'That's my goal', but - after the 10 years I played there - it would also be a dream to one day be the Liverpool manager.

"I live in the here and now, and that means Bayer Leverkusen, which gives me a lot of pleasure."

Leverkusen picked up their first win of this season's UEFA Champions League group stage on Wednesday thanks to a 2-1 success over Real Sociedad.

Hyypia's side can also move top of the Bundesliga on Saturday with a win over champions Bayern Munich, provided leaders Borussia Dortmund drop points against Borussia Monchengladbach.